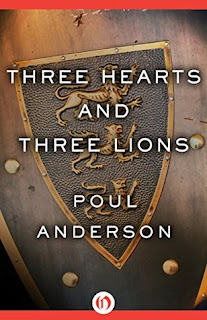 Three Hearts and Three Lions is another book by Poul Anderson that is recommended in the original Appendix N of the original 1st Edition Advanced Dungeons and Dragons game in the Dungeon Masters Guide.

Despite that, I'd never read it until now. It's a book fit to be placed in the same realm as the Red Book of The Illustrated Bulfinch's Mythology, the Legends of Charlemagne. While Charlemagne and his paladins are perhaps not as popular as King Arthur and his Knights of the Round Table, heroes such as Roland hail from the time of Charlemagne and one of TSR's green historical books focused on those paladins.

Being an older book, Three Hearts and Three Lions has many covers. The current one is serviceable enough, but my favorite would probably be the following: 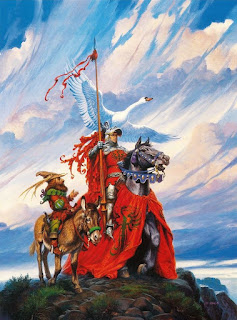 Holger atop his black horse, the mighty swan behind him, his wood dwarf comrade at his side. The sense of motion with the clouds moving from left to right. It's a great piece.

Concerning writing, Poul Anderson is a writer worthy of reading just to study his word crafting. His descriptions are not overly long but provide a reader with detail enough to know where the characters are, what the character looks like, and what the mood of the land is. He tells in one book something that another author might have taken six to do so.

The main hero, Holger, is a 'modern' man who while fighting Nazis is grazed in the head by a bullet and awakens in another world. Poul doesn't spring everything on the reader at once. There is a build up of one scene to the next, each increasing the hero's awareness that he is not in his own time anymore, indeed, not even in his own reality anymore.

This time traveling hero bit borrows a little from the even older A Connecticut Yankee in King Arthur's Court: by Mark Twain and is even referenced in the book itself.  The adventures of 'modern' man in other worlds was a favorite device before it fell out of favor. Even authors like Robert E. Howard used it as a means of taking modern giants of the world into environs more fitting for their strength and powers.

Holger's trip to the fantasy realm is one of the troublesome issues in that he appears to be of this new world. The horse he spies upon awakening seems to know him. The arm and armor he spies fit him perfectly. His knowledge of the language of the world is quickly mastered. His knowledge of deeper issues comes and goes at times prodded to the surface by current happenings.

This book brings many bits to fantasy. Here the troll is not a mythic race like those of the Norse, able to use magic and arms and armor, but rather, a massive brute with a huge nose and black eyes with green skin. Its most fearsome power though is its ability to heal from any wound.

Here is also perhaps one of the earliest examples of Law and Chaos in war. Chaos is wild and free and often evil while Law being civilization and the uplifting of man. Even in his time, Nazis were known for what monstrous acts they'd committed, and Poul Anderson puts them firmly in the grip of Chaos, evil entities intent on ripping down the civilization of humanity.

We also get a taste of courtly love as Holger travels with a swanymay, Alianora, a young woman raised outside of the norms of humanity and kin more to the wood dwarves and spirits of the woods like the unicorn she rides. Being a swanymay, Alianora is capable of becoming a massive swan with powerful wings and a stinging bite.

She does this through a magical garment, gifted to her supposedly from the Valkyries, as opposed to being an innate shape changer.

The use of Chaos and its minions, like the timeless and fey elves, who aren't evil necessarily, but are bored and are capricious at best, are intent on spreading their world. For them, the sun and its light, for example, are anathema. Their own world lies in a subtle shade that protects them, and there is a distinct difference between the world of man and that of the Fey.

Holger's travels bring him against wild men of the woods, fey courts, and one of the most powerful allies of the Fey and of Chaos, Morgana of Avalon.

The novel ends with Holger knowing who he finally is and wielding his sword, Cortana, a blade made of the same material as King Arthur's Excalibur and Roland's sword Durendal. In the restored Holger, better known as Ogier the Dane, a hero who, like King Arthur, went to dwell on Avalon until he was needed, rides forth to save the world form Chaos.

Given how far removed modern readers are from the story, it's hard to emphasize how unique and enjoyable this book must be to someone who's spent years reading Games Workshop's various tales and their own Moorcock inspired tales of Chaos. How far Dungeons and Dragons have taken the rare and powerful paladins of older editions and made of them another class that's equal among the others with their own distinctions.

Given its age though, the novel's prose remains top notch and easily readable. If you're looking for a way to kill an afternoon and to wonder at where some of the foundations of modern fantasy come from, Poul Anderson's Three Hearts and Three Lions fits the bill.