Wolfheart by Richard A Knaak 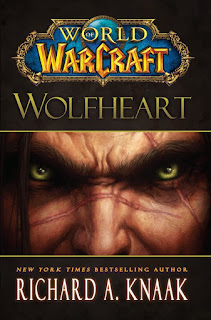 Wolfheart
Written by Richard A. Knaak
World of Warcraft
$7.99 in Kindle Format

I'm a fan of Richard A. Knaak from way back in the 80's. I read his Legend of Huma and Kaz the Minotaur as well as his numerous Dragonrealm series. In those days Dark Horse and the Gryphon were some unique characters although the Farmboy who saves the world cliche was in full bloom.

Since then Richard A. Knaak has done work for a variety of properties including Diablo and World of Warcraft.

The last time I knew anything about Warcraft, Thrall was warchief, Night Elves were an almost unknowable immortal force and there were many stories to yet to be told.

Thrall is apparently dead. There's a brand new warchief in play and he isn't a fan of "can't we all get along." Instead, he's an aggressor. He leads the Horde on a mission against the Night Elves and the Alliance.

The Night Elves? No longer immortal. They are aging and susceptible to disease. One of the characters introduced in the book, Jarod Shadowsong, is brought in trying to save his lover, Shalasyr, whose once immortal frame cannot resist the lure of death anymore.

Mind you, much like many older characters, the pains and aches of these Night Elves are for storytelling purposes only. Few of them are ever hindered by these aches. There's not a "Malfurion staggered and fell to the ground clutching his chest knowing that the foe would get away this time..." No, it's purely a storytelling device used here.

The Alliance? Well, it's got members I don't recall hearing about before, including some dark dwarves whose portrayal as being paranoid of others up to the point of bringing their own food to large gatherings, such as that of the alliance, is entertaining and gives us a different take of the dwarf.

The gnomes and goblins of the Warcraft setting, always playing with technology that is resource intensive and dangerous to both user and enemy, are in full force here as well.

In terms of readability, I enjoyed Richard's work even though so much had changed. If you like the World of Warcraft and are a regular reader, the changes might be normal for you or you might already be passed these. This is a done in one book that ties into the other books and history of the setting so it's a fixed point in time in a setting that keeps moving forward.

Made me glad that I wasn't playing a game in the setting. I get mad enough when events like the Spellplague happen and give us a massive time skip in a setting to 'shake it up'. All of the changes described in this volume would make me leery of ever playing in such a setting again.

In terms of gaming, if you're looking to shake things up, this novel has enough inspiration to last for numerous campaign settings:

1. The Old Order Changes: Take your pick. The orcs have a new leader. The Night Elves are no longer immortal. The spirit of one of the ancients chooses a new champion in the modern era. The landscape itself is shaken up. Forces that were once enemies are now potential allies.

2. Sowing Dissension: Being a long-lived race, the Night Elves have had a few splits. But what happens when some of those errant children wish to return home? What happens if during those negotiations some of those elves are murdered? There are always numerous factions within the factions. Just because some Night Elves rever the druids and priests doesn't mean they all do.

3. The Enemy of My Enemy: The wolfkin in this series, worgen, werewolves who have control over their own shapeshifting, are lead by a man who once quit the alliance. In doing so, he created a rift among the human kingdoms. That rift is not easily mended but under threat of destruction by the orcs, well, giving someone another chance as opposed to being wiped out? Let's take a roll of those dice eh?

4. Competent Enemies: One of the nice changes of pace here is that the Horde are dangerous. They are cunning. They are competent warriors in the field. They have strategies in place for dealing with things like scouts and reconnaissance. In some aspects, the orcs as portrayed by Richard A. Knaak should have wiped out all resistance in this book. With their numbers and abilities, they had too much of a head start against the opposition. Divine resistance indeed. Where Thrall might have been a sympathetic hero, Garrosh is strong, cunning, and has powerful alliances and allies on his own side. His failure to take a complete victory here is a hand waved situation.

5. Relationships: In a campaign that involves characters, and there's nothing wrong with beer and pretzels Dungeons and Dragons, but in one that involves the relationships between characters, there are lovers, friends, family and rivals and frienemies. Use them all. Some will be poisoned by the actions the characters take. Will they seek to make them better? Some will be cast aside as the characters experience their own growth and their own wants and needs change.

Wolfheart is a novel that thanks to it being done in one, is an interesting look at a setting in motion that has probably already left the actions and elements of this novel in the distant past. Richard's writing allows one to see how the various conflicts of the world happen as the battle for resources and the need to redeem ancient actions shapes the modern world.