The Broken Sword by Poul Anderson 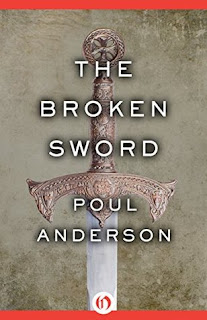 
Let loose the red tide! Let the men be heaped like reaped golden wheat! Fall back in this telling in one book what would take modern authors a dozen times more pages!

Poul Anderson, one of the original quoted Appendix N authors in the original Dungeon Master's Guide, brings a tale of Norse revenge across generations.

If you are a fan of the show Vikings, if you're a fan of Elric of Melnibone, of cursed swords, of dire destinies, or cruel, uncaring gods, or things that never were but fit into the tales of old lore, then you should read The Broken Sword.

Poul Anderson weaves together some things that we say now are not true, such as the winged helmets of the Vikings, as well as land conquest as England suffers the raids of the Vikings. Of the rise of the One True God against those gods who used to rule. It showcases many different elements of mythology into one where there are still differences, but the mythological world is shared.

The gods of old Ireland are half gods, the elves here, not mere mortals with long hair who are good with bows. The trolls here are ancient and elderly powerful creatures that are not mere brutes that only know how to howl, but how to plan, how to set forth on ships warded against the wild seas, of using weapons of massive stone and bone because their strength allows them to do so.

The elves here are masters of magic, they control the weather, they can heal, they speak with the dead and are all things cruel and capricious. But they are few in number and even as they are timeless, they are not immortal. So when the opportunity arises to steal a man-child and add his mortal strength to their own, they take it.

Sadly they take this man child from a family that has wronged natives of England, and one woman who survives grows powerful in the dark arts of Witchery and sells all including her soul to darker powers to cast dark fate against the family that slew her own.

Into this mix comes the elves who when they capture the man-child, replace him with a troll born changeling. A heartless brute who has sisters and brothers and who will find his destiny leading the trolls against the elves and their kin.

Here the elves and trolls share a weakness to iron, they share magics even if the trolls are not as advanced as the elves, the two are both moral-less entities that are unseen by men as their battles are not fought in the mortal world. They both dislike the sunlight...

Poul Anderson crafts the tale and moves through the lives of these twins, the elf raised Skafloc, a champion more elf than man, more inhuman than human, and his pale troll kin shadow, Valgard.
Their lives intersect in unknown ways as the witch sets her sights on Valgard, a non-human raised among men whose brutish lusts for battle and his desire for the women who manipulate him through the whole of the story.

So much happens in The Broken Sword, that Poul only hints at some of it. When Skafloc must seek to mend the Broken Sword, this cursed weapon forged long ago, a weapon whose fate spirals down time with such doom, that mighty Thor himself shattered it, Skafloc seeks out the heroes of Ireland. He sails with the lord of the Sea to the lands of Jotun where the sword is forged anew but the travel there and back is merely hinted at.

Even at the start of the tale, when we are introduced to how much of the culture of elves flows through Skafloc, we are given a description of Imric, the ruler of the elves, the one who stole Skafloc, fighting against "with a troop of exiled gods, grown thin and shrunken and mad in their loneliness but still wielding fearsome powers."

That in and of itself sounds worthy of more pages! Who were these old mad things that were once gods?

Other gods, more familiar, are still about. The Dark Prince himself, claims to have known Odin in the guise of Loki and liked not the one-eyed Lord. Odin, the master manipulator, the one who pulls strings, who would be a good fit for Merlin from Excalibur, weaves a fate to the son of Skafloc that is again, only hinted at here. The final fate of the gods, or mankind, or the Broken Sword itself? Vague prophecy but no finality.

And for this book? It works perfectly. It casts the net of the tale against a background much larger than what we see here. We are visitors to the tragedy that besets violence and only for a limited time. We see how the effects of the coming of a new religion forces out the old, we see those ancient powers still mighty, still magnificent in their own realms, know that their time is limited even as they themselves are timeless.

Poul Anderson brings us no glowing heroes. There are none here who escape without the reader seeing their faults. The elves, proud and haughty, the witch consumed by vengeance, the old gods striving to survive, the trolls, equally proud and equally haughty, the old glory of Ireland, the sorrow of the fauns who survived the passing of the old Gods of Greece and Rome... it's a tale that set forth so much more than modern readers, especially those who say enjoy A Game of Thrones, might even be aware of.

If you want to see where the roots of modern fantasy come from if you want a rousing Viking tale of old gods and cursed blades, The Broken Sword by Poul Anderson is the perfect fit.