The Mongols by Stephen Turnbull Illustrated by Angus McBride 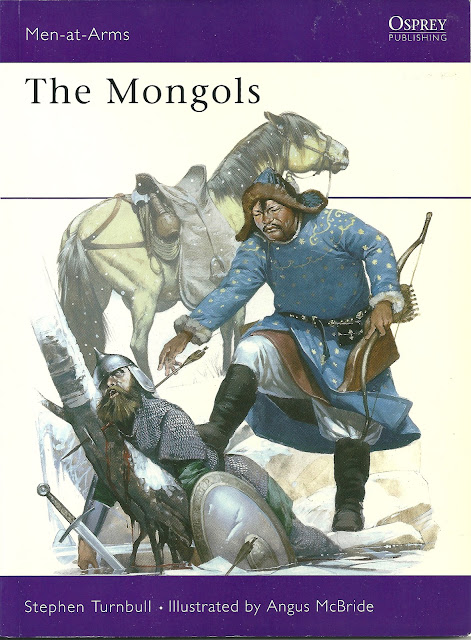 From my brief observations of the various Osprey titles, Stephen Turnbull is the main scholar of the east. From my years of enjoying Iron Crown Enterprise Rolemaster and Middle Earth role playing games, Angus McBride is an artist whose skill set is still sorely missed in all artistic fields.

I picked this puppy up at the Skokie Half Priced Books.  I've learned over there that if there is a book you see and you want it, waiting for a sale may sale you a few dollars but may save you more than a few because the item you want has long since been bought by someone else.

After reading the Kalka River 1223 Campaign book, and owning the Warrior Mongol Warrior 1200-1350, also by Stephen Turnbull, but that one illustrated by a modern artist who also does role playing products, Wayne Reynolds, I was eager to read the Mongols and see what else I could glean of them.

Hard to say. I couldn't honestly tell you how much of the generalized knowledge here I knew in some form or another before hand but I can tell you that it's well put together in terms of a quick summary of how dangerous the Mongols were to their enemies and the vast changes their brought to the world.

If you can find it, it's worth a read. I believe that the more 'modern' book by Osprey on the subject is the Mongol Warrior 1200-1350 in their Warrior series.

In terms of how dangerous the Mongol army was? I'm always amused that fantasy settings have to go to the final full tilt doomsday device when rebooting their settings like the Forgotten Realms and the Sundering. Historically, empires rose and fell with great frequency. The problem many people have isn't necessarily with their favorite group of NPCs being killed, it's how it's done. Forwarding the setting, further invaliding past purchases, isn't the way in my opinion.  Having a competent group of adversaries that the players can actually fight against, if the campaign is the thing as opposed to the dungeon crawl, requires there be, you know, actual competent foes.

You don't have to throw gods, demons, devils, and the kitchen sink into the setting to showcase how devastating the real world historically was.

The illustrations by Angus McBride for the series include eight separate paintings including the one on the cover. In that instance, I believe that's some poor Russian bastard whose been taken down by the archery skill of the Mongolian warrior retrieving his arrow.

Another shows Mongols in winter coats with pack camels. Another shows Mongolian heavy cavalryman battling against what could be Crusaders.  another the Mongolian commander and his 'naccara' drummer. Another the Mongol camp with children and small animals. Another of the Mongol camp shows a horseman with his hunting bird and a host of unfortunate animals strapped to his horse while in the background some dogs look on hungrily and behind them women tend to a fire.  Another shows a Mongol heavy cavalry officer in a siege of a city in China.  The last is a Japanese samurai fighting against Korean auxiliaries.

The illustrations may be a little dated in today's brighter, louder, more action world, but for illustrating the Mongols? For showing some slices of life? They're perfect and can easily serve as templates to springboard visual inspired tales.

The book includes numerous real world paintings taken from around the globe. One of the interesting bits here, as I've mentioned in the past, is that the artist generally tend to make the subjects wear the clothing and armor of the time, as opposed to when the painting was supposed to take place. This could be a nice 'red herring' for a game where the characters are puzzle solvers if they failed to take that tendency into account.

One of the things that book notes in terms of difficulty, is how quickly things erode and rot. Whenever I see those shows and movies that are supposed to take place in the distant future and they have twentieth century buildings and vehicles still around is man, that would not last a year or two after man fell from grace. Right now people are being killed by failing infrastructure. Imagine it for a year or two without a full fledge fire department to handle vast blazes. Imagine it if an earthquake hits. Imagine it if a tidal wave hits. We're very industrious in how much we rebuild and as anyone whose paying attention to the news in America at least these days, knows that natural disasters require immense support to overcome. Without that ability to draw on massive funds and manpower? Yeah, it's all going away in a very short time.

In terms of the Mongols themselves, they are amazing for numerous reasons. Their reach encompassed a lot of what gamers traditionally associated with Oriental Adventures, including unifying all of China. They also devastated Russia so bad that the book on the Kalka River says it put Russia back a century or two in terms of development. They also used allies and defeated foes to attack other foes like when they tried to take over Japan on two separate occasions.


The book provides a lot of details on what the typical Mongol drank on the march, as well as what he ate. These details, as well as clothing and various other bits, can provide depth to a GM looking to add those elements to his own campaign.

They were also a multi-ethnical army with both Muslim and Chinese siege engineers among them. This facet of the Mongol war machine would work well in a fantasy campaign where the players wanted to play something exotic. They could be part of an invading or formerly invading army that was defeated and now have nowhere left to turn except well, either bandit or adventurer. Their use of Chinese and Muslim engineers also allowed the introduction of siege weapons that were unlike those already in use by their foes in the West.

When looking at the strengths of the Mongols, there are numerous advantages in their corner. Not only did they have great mobility, but they were able to bring with them their entire way of life with mobile yurts for example. They also made sure to scout out the areas they were heading into. They would seek out information on the various internal conflicts and try to use those to separate their enemies into smaller groups to more easily destroy them. The Mongols also did things few others would dare, like attack Russia in winter.

If you're looking for inspiration for your L5R game, Oriental Adventurers, or just want to see how devastating the Mongol war hosts were, this book should provide you a quick door into the death and destruction that a army with a few unique hooks in it's arsenal could unleash.