I read the reimagining of Michael Moorcock’s Elric novel, The Ruby Throne a while ago and looked forward to the follow up, Stormbringer.

Little baffled by the decisions made here.

Elric is far more bloodthirsty and well, useless than he’s been in different incarnations. This ranges from his crippling obsession with Cymoril to his callousness in wiping out a village.

It’s not that these things aren’t “acceptable” or aren’t suitable for Elric. It’s just such a different exaggerated take of him that I’m not sure I like it.

There are other liberties the series takes. For example, the rune swords Stormbringer and Mournblade are gifted to Elric and his cousin and are the Prince of Sword’s “Daughters” as opposed to being what they originally are.

In the context of the story, it works. In the greater whole? If they ever decided to go on? There would either have to be more liberties taken or it would have to continue to diverge more and more.

On one hand, watching A Game of Thrones, I can easily see this version being adapted for a HBO style 4 part series/movie or something.

On the other? Still digesting it.

The good news though, is that art is fantastic. The visuals are stunning. Much of the setting, especially on Elric's home island, could be straight from a Clive Barker Hellraiser book.

The layout and wording and coloring all work to move the story forward. It’s well done and visually appealing. These version of Elric and his people will stand out in the mind as the modern interpretations.

Further good news? It’s inexpensive. Under $10 for either the digital version or the print version is a good deal for quality art like this.

If you’re a fan of sword and sorcery and want to see what a modern version of Elric is like that doesn’t cleave to the story as rigidly as previous comic adaptions have, this one is for you.

Posted by Unknown at 8:00 PM No comments:

The Geography of Thought by Richard E. Nisbett 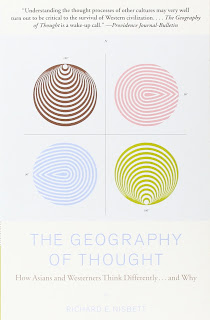 As someone who's been a gamer master and tinkered with writing, the idea of HOW people think and what makes them think that way fascinates me. When I heard of the Geography of Thought, I figured “Hey, now I can know why that dude from Legend of the Five Rings thinks differently than that Paladin in 5th edition D&D.”

Let me start by saying that I don’t know if I agree with everything that Richard E. Nisbett puts forward. And that’s okay because he makes a lot of allowances. He points out that NOT everyone in the different regions thinks this way. He points out that “Asians” is a huge umbrella and that there are differences within that vast branch, just as there are with Westerners.

Nisbett also points out that things are changing more and more as the world continues to become flat. As more cultures cross pollinate, there are more and more examples of each one’s thinking on the other side.

To get the ball rolling, chapter one, The Syllogism and the Tao, breaks down some of the historical roots as follows:

Westerners: “The Greeks, more than any other ancient peoples, and in fact more tha most people on the planet today, had a remarkable sense of personal agency – the sense that they were in charge of their own lives and free to act as they chose.”

Asians: “The Chinese counterpart to Greek agency was harmony. Every Chinese was first and foremost a member of a collective, or rather of several collectives – the clan, the village, and especially the family. The individual was not, as for the Greeks, an encapsulated unit who maintained a unique identify across social settings. “

Nisbett goes into several more differences and his thinking as to why those are vital to understanding and he tries to make his case for it with illustrations, examples, modern testing, and other fun bits over the course of the next few chapters.

The good news is that the book is written so that anyone should be able to understand it. The illustrations as testing are a quick way to see which path of thinking you may fall under. The ideas presented testable.

If you’re a fan of creating cultures, the Geography of Thought can force you to think about why those cultures act the way they do and what causes them to evolve.

Posted by Unknown at 7:24 AM No comments: