Under Fallen Stars by Mel Odom 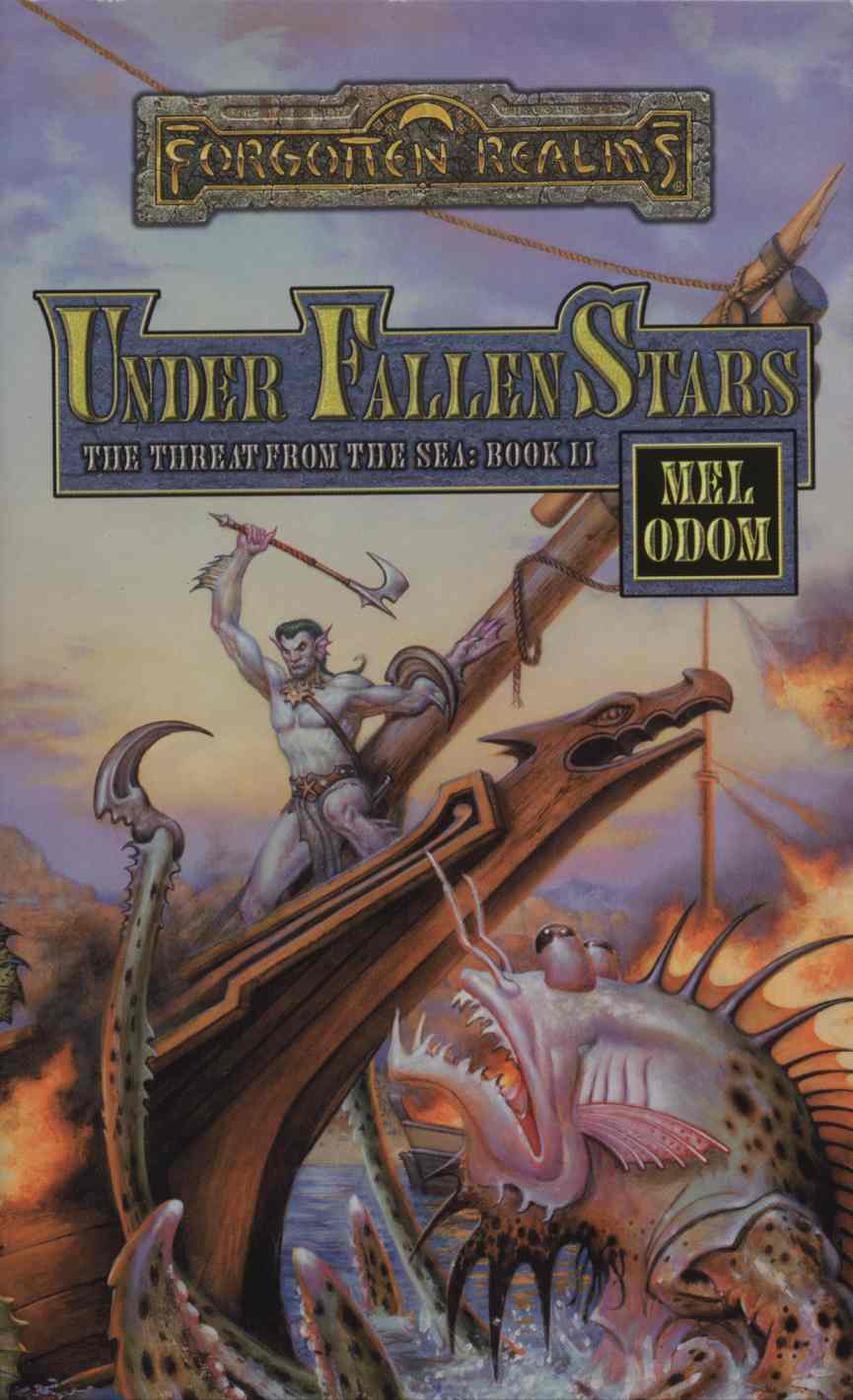 One of the interesting things about how the previous book, Rising Tide ended, was the heroe's quest to get to Baldur's Gate. This is a fairly famous city in the Forgotten Realms for several reasons ranging from its initial launch point in the gray boxed set back in the day with the mercenary group the Flaming Fist, to its importance in a video game called... yes, Baldur's Gate.

At the end of the previous novel, the hero discovers that he needs to be at Baldur's Gate and so, he goes on an overland journey. Due to the raids and attacks, the pirates in alliance with the various horrors of the depths, the goods going north must now do so through land. But here Mel pulls out another set of sharpened stakes and notes that even overland journeys are more dangerous because everyone is doing it so the orcs, goblins and other land based monsters, are essentially having a field day. This is a good example of showcasing how one change in one part of the setting can effect other parts of the setting. Sure, soldiers and sailors are in more demand than ever, but that doesn't guarantee victory!

At the start of this novel though, the journey is finished. There is no daily recap of the heroic quest to reach the city. They made it. When running your own game, how important is each and every potential conflict? In some games I've played in, the GM insisted on careful calculations of every gold piece spent and earned, of every item of clothing and possession written down. Depending on the GM and the players, this can be fun and serve some distinction between games. In other groups and GMs, it can be tedious to a level that makes the players simply not want to play.

This gets back to another old adage around this blog; know your players. If your players are highly detail oriented and enjoy noting their possessions and are always on the lookout for the strange bits, then indulge them in it. If they don't, have some common ground where the players understand X amount of wealth will be lost on housing and supplies and in exchange you want bring the ban hammer down on them when they make assumptions that might be... presumptious in another style of game.

Now the big bad of the series, his attack on Baldur's Gate is meant to shatter it. To cast the city to the four winds. Well, at least according to this book and the 4th edition version of Baldur's Gate, that didn't quite happen. Which makes sense. Previous novels and material have established Baldur's Gate as well, not invincible, but something that would require such a major upheaval that having it taken down by some fish men might prove problematic to those readers heavily involved with the series.

And here's another old adage; kill your babies. If you, as the GM, are running some epic material and want to do the old styling of showcasing just how powerful and vile the enemy is, destroy a few major cities, kill some major NPCs, and create havoc on the shipping lanes. This lets the players know that the stakes are very high and that they need to be at the top of their game if they are to thrive.

The only potential problem in such cases though, is that if you are running multiple campaigns in the same setting and want things to not be so smashed or if you're running a group with other GMs in the same setting. You can either let the other Game Masters know ahead of time or you can decide that the epic nature of the story requires you to bring the setting to a different level than the players have assumed and this in and of itself will let the players know that something big is happening here.

As a GM though, unlike an author, you have to be ready to follow what the players do after the attack. In the previous novel, Waterdeep took a beating. In this one, it's Baldur's Gate. What if you're players are like true old school players, not like the 3rd and 4th ed ones, but characters who have build their towers, created their castles and have their thief guilds? Chances are good that they may want to rebuild their schools, recreate their schools, and renew their alliances prior to moving on to attack the ones who attacked them.

You can either push them onto the 'adventure' that is waiting, or you can craft material out of their rebuilding efforts. If supplies are limited, then there will be struggles over those supplies. If the players have not made firm alliances with the local politicians, then they will have even greater struggles. At the end of the day, depending on the previous actions of the players and their current activities, they may have to actually pack up and leave the city. If they are ready though, and they do have supplies, then let them reap those rewards. Perhaps they have foodstuffs that the city needs or access to magic that allows them to quickly clean and rebuild the city. Perhaps the fighter is in alliance with the thief and they keep the rougher rogues of the city in check allowing people to come into the city and make new opportunities for themselves until they learn that the beneficial players perhaps have a few 'taxes' of their own that they are going to lay down.

Another factor that comes into play here is a massive gate that allows the villain of the piece to move from the Sword Coast to the Sea of Fallen Stars. There are also nods to Spelljammer with a Helm, used tospelljamming helm on a ship or want that much magic in the setting, if it's not overly abused and isn't a sign of the campaign tone and focus shifting, and just an nod to those other elements, even the most jaded player may get a gidding feeling about knowing what a helm is and how the ship is going to meet up with others in the Sea of Fallen Stars from a river that ends long before it gets there.

Use the setting and the rules are bones to build the structure of your game and if those tools don't let you do what you want, smash them and make some new ones.
Posted by Unknown at 7:24 PM