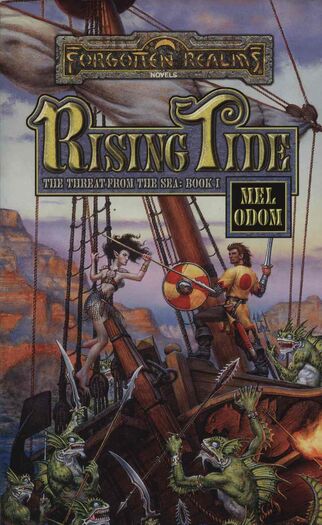 The first book in the Threat From the Sea series set in the Forgotten Realms setting introduces a number of new characters while utilizing existing monsters from the D&D mythology. For those who don't want a spoiler review, suffice it to say that I enjoyed the whole series despite thinking that the main character would win in an Emo off with Drizzt.

Onward to more specifics that may include some spoilers.

When looking at campaign design, there are many routes a Game Master can take. There are many groupings that may crop up. The trick is, do you use them or spread them out? Adventure paths often face this issue. If everything focuses too much on the main plot or event, it can feel very forced. If not, it can feel very random. For the traditional dungeon crawl, that random thing is part of the lure of the game. For those who want a little more focus out of things, it is something to be avoided.

When I read the year of Rogue Dragons series, I noted that by grouping things into a dragon category catch all, it allowed the authors to dig out all sorts of under utilized dragons like planar dragons, as well as various templates and other game bit lore from the 3.5 game engine.

Speaking of underwater combat, this brings up another potential problem that the heroes have to face. Man versus the environment is a classic bit and in the Year of Rogue Dragons, when fighting enemies that can all fly, the air is an issue. Here, it's the water. There are several things that complicate the issue in both cases. There are a lot of native monsters to those environments whose mastery of them should be better than outsiders. Combat is now in all dimensions instead of just forward and back. Underwater fighting also involves a lot of things that may not be obvious on the surface like, oh, breathing. Vision also suffers the further down you get from the sun.

The real question is how much do you want those things to matter. Do you want to gloss it over or look for expanded rules and details? In the 3.5 era, there were a lot of aquatic based source books, some better than others. For most though, the core rules should do just fine.

Another element the book handles is weaving an epic story, that of an invasion of Waterdeep by the return of an ancient evil and its minions, with a deeply interpersonal story of a man searching for his purpose. While I absolutely detest the emo nature of the main character, his search for meaning is one that a lot of people can relate to. Regardless though, the fact that the author is able to bring the personal elements of one character to the forefront of a series where danger is all about is important. Never forget that while the action and scenery can help move a game along, if its all action shots and explosions, you get the Transformers which can be entertaining to watch, but lacks any depth or substance.

Mel Odom does a nice job of bringing various elements and areas together and showcases an epic story with a series of heroes that have a long way to go prior to meeting the evil that threatens them all.
Posted by Unknown at 6:49 PM